A trade show concept for a monument.
With a stand that inspires.

Big, bigger Airbus – that was the motto at the time of the name change from EADS. An enormous trade show appearance for gigantic trade show halls. An integrated conception including trade show principles that functions on an international scale, fits perfectly with the family brand and can be adapted for all associated companies. VRPE has been making its pitches since 2005 and filling external, complex requirements in a problem-free manner: from the architecture and interior design including selected exhibits to the setup. The presentation and staging of the products are unique. The hospitality area wows with its lounge, catering area, restaurant, conference rooms and offices – for customer receptions, investor talks and press events. The throng at the trade show stand is enormous, from politicians to private aviation fans alike. The sometimes two-story monument has to be able to withstand this. Which it does: as a benchmark of the industry.

The complete, integrated re-development of the trade show concept was listed on our specification sheet. In close cooperation with the customer, we developed a complex total communications concept at record-breaking speed. And all that while taking into account content-related, design-related, construction-related and technology-related matters. With an integrated design and consistent storytelling for 3D, animation and film work. For the stand itself, we visualized a uniform, artificial facade design as a "stage background." Because the principle performers were and are the products themselves: impressively exhibited and put in the limelight. We designed the integration of thematic forums such as "Efficiency" and "The Future, by EADS" from the very start. In the hospitality area, we took into account both the representative nature as well as the functionality. We created a "clean & clear" architecture statement. Because this fits with the core of the brand. It was important that the brand be visible from a distance, but not overwhelm the visitor at the stand: That's why we designed an intelligent detail branding that communicated the message in a quiet yet determined manner. Basis: the trade show principles for Airbus exhibitions and interior design defined by us.

Our trade show principles form the foundation for the application at trade shows (stand, chalet, pavilion design), for interiors (e.g. reception areas, offices, showrooms) and architecture (e.g. facade design, exterior areas). The concept covers a wide range of projects: from small pop-up stands to building architecture. Due to the internal corporate structure of the customer and the very different demands and requirements, we had to find a flexible solution that would fit into different budget parameters.

The selection of material was carried out with an eye on the high demands for flexibility with regards to execution location and execution quality. High quality and robust. And naturally the ability to adapt, shape and model to the perfect brand staging. We also played with production technologies, creating things previously unseen and unforgettable – for example igloos with glass fiber mats.

The tension between soft and hard surfaces, such as felt and painted surfaces, or the use of wood gave the stand warmth. Thus an ambiance was created in which visitors and employees alike can work and communicate with each other in a relaxed atmosphere. The sculptural air stream relief, which embodies warmth on the one hand and technical precision on the other, is a good example of the evolutionary hospitality concept always concerned with innovation and agility that we created for the brand.

The trial installations are extremely demanding. But we feel the overall radiance of the monument: how the implementation of the messages in the design, technology and setup intertwine. During testing, the innovative power of the digital presentations for the visitors is evident. The idea behind the whole can be felt down to every detail – the concept unfolds. Even better than we could have thought – because it is unique and the first of its kind, we ourselves were surprised by its monumental overall impact.

And now they stand somewhere in the showplaces of this world: The chalets, pavilions and stands of the Airbus companies. With a high recognition value, while still retaining individuality and surprise: due to the current main topics, new product presentation or because the design plays with elements of the national culture of the exhibition country.

After sevens years our original concept holds true; and after each pitch won, we add new, additional accents to it. This makes the concept unique. As reward, we won a Silver in the XL category for the Adam Award in 2009 and 2011. We were also nominated for the 2011 German Design Award.

However, much more important is client and customer satisfaction. When employees like to work at trade shows because the stand structures and dampens the hustle and bustle; and visitors are in a good temper and willing to make deals – because everything is just right. By the way: that's approx. 500,000 people at the one-week Paris Air Show. However, as usual: We are pleased with this success story. And a bit proud too. 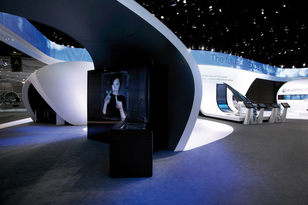 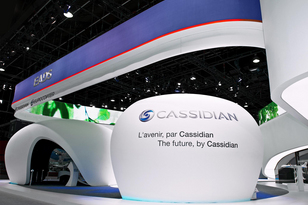